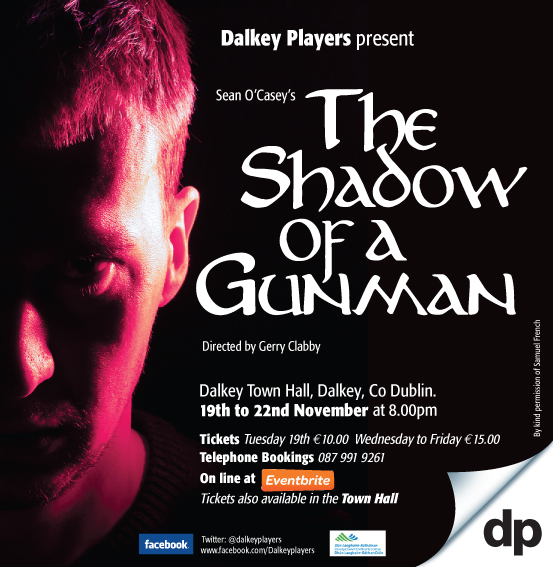 By kind permission of Samuel French

It’s 1920, and War of Independence rages on the streets of Dublin. Donal Davoren, an aspiring poet and recent arrival in a Dublin tenement is the subject of much curiosity. Mistaken for a gunman on the run, and with a whiff of danger about him, everyone is curious about Donal including the beautiful young Minnie Powell. What danger  can there be in being the shadow of a gunman? But soon the reality of the brutal war on the streets outside moves closer to home with tragic consequences.

The Shadow of a Gunman premiered at The Abbey Theatre in 1923 to immediate success, selling out for the first time in the Abbey’s history, and establishing Sean O’Casey as a playwright. The first of O’Casey’s three ‘Dublin plays’, this two-act work looks at the effects of war on ordinary people as they try to cope with its impact on their lives. RTÉ All Ireland Winners’ Dalkey Players are delighted to bring this O’Casey masterpiece to Dalkey. The ‘Dublin plays’ premiered during a time of revolution and civil strife in Ireland, proving both provocative and popular, and establishing O’Casey’s reputation as one of the most influential and enduring Irish playwrights.

This website uses cookies to improve your experience while you navigate through the website. Out of these cookies, the cookies that are categorized as necessary are stored on your browser as they are essential for the working of basic functionalities of the website. We also use third-party cookies that help us analyze and understand how you use this website. These cookies will be stored in your browser only with your consent. You also have the option to opt-out of these cookies. But opting out of some of these cookies may have an effect on your browsing experience.
Necessary Always Enabled
Necessary cookies are absolutely essential for the website to function properly. This category only includes cookies that ensures basic functionalities and security features of the website. These cookies do not store any personal information.
Non-necessary
Any cookies that may not be particularly necessary for the website to function and is used specifically to collect user personal data via analytics, ads, other embedded contents are termed as non-necessary cookies. It is mandatory to procure user consent prior to running these cookies on your website.
SAVE & ACCEPT